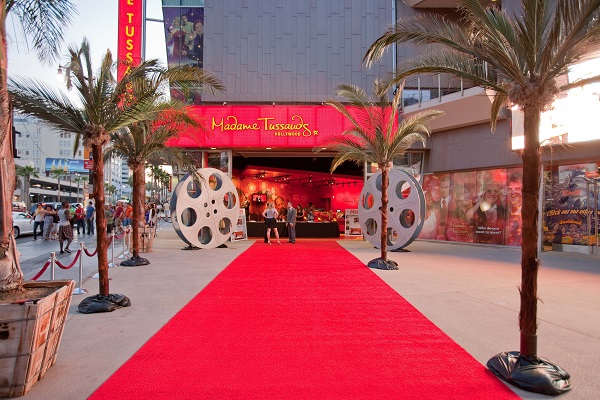 In 2009, Hollywood Boulevard added another jewel to add to its tourist crown, literally alongside the stars' footprints at Grauman's Chinese Theatre, the Oscars' home at the Kodak Theatre, the El Capitan, and the giant Hollywood & Highland complex.

Madame Tussauds wax museum, is actually a very old and respected establishment, dating back to the 18th century, when Madame created and exhibited lifelike wax figures of the stars of her time, which included Benjamin Franklin and philosopher Voltaire.

Today, this new branch of Madame Tussauds focuses almost exclusively on Hollywood stars, as befits its new location. Tourists looking at the cement footprints of Hugh Jackman or Brad Pitt at Grauman's forecourt can now simply stroll a few yards west to rub elbows with life-size replicas of those same stars, many of them breathtakingly lifelike.
Immerse yourself in an interactive experience with A-List celebrities, Hollywood icons, Super heroes and more! Who do you want to meet?

Millions and millions of people have flocked through the doors of Madame Tussauds since they first opened over 200 years ago and it remains just as popular as it ever was. There are many reasons for this enduring success, but at the heart of it all is good, old-fashioned curiosity.

The making of a Star

1761:Madame Tussaud is born Marie Grosholtz in Strasbourg.
1777:Marie models the famous author and philosopher, Francois Voltaire.1780:Marie becomes art tutor to King Louis XVI’s sister and goes to live at the Royal Court in Versailles.
1793:Marie is imprisoned with her mother in the notorious Laforce Prison,Paris. On her release she is forced to prove her allegiance to the Revolution by making death masks of executed nobles and her former employers, the King and Queen.
1794:The French Revolution ends and Marie inherits Dr Philippe Curtius’ wax exhibition.

Bringing history to Britain
1802:Madame Tussaud takes her exhibition on tour to the British Isles, leaving behind her husband.
1835:With her sons, Madame Tussaud establishes a base in London at ‘The Baker Street Bazaar.
1846:Punch Magazine coins the name Chamber Of Horrors for Madame Tussaud’s ‘Separate Room’, where gruesome relics of the French Revolution are displayed.

A historic attraction is born
1884:Marie’s grandsons move the attraction to its current site on Marylebone Road
1925:The attraction is devastated by fire.
1928:Restoration is completed with the addition of a cinema and restaurant.